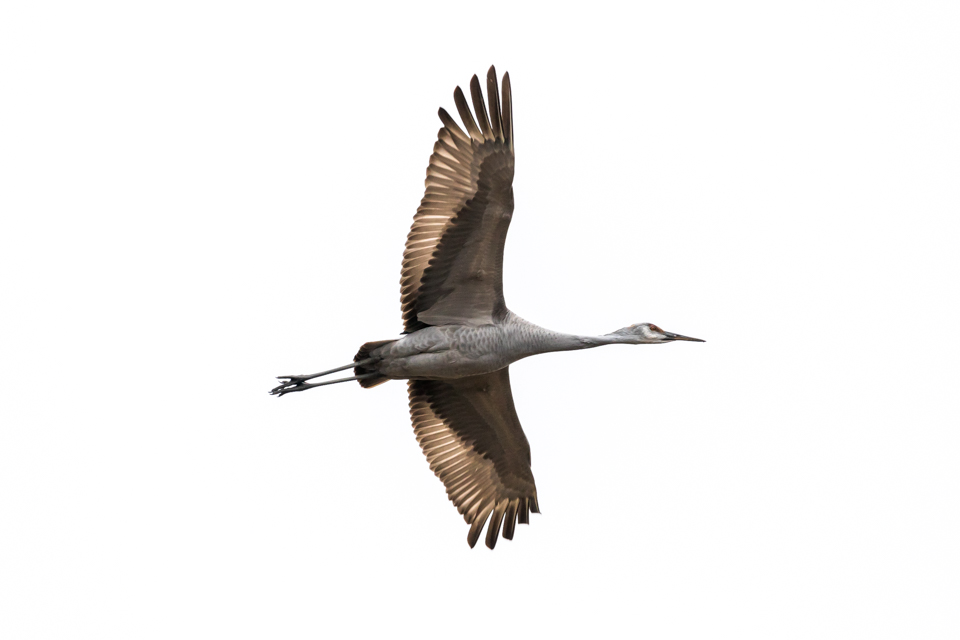 Back in November I presented the idea to my wife about spending New Year’s weekend in Alabama. This would give us a rare chance to spend a piece of the holidays with my family and it would give me a chance to photograph wintering Sandhill Cranes near Lake Guntersville. She agreed and so the trip was on. Every fall, more than a half million Sandhill Cranes begin a great migration that takes them south from their nesting grounds in Alaska, Canada and other northern territories. The birds fly high, making them less obvious travelers than the squadron of Geese whose honks over our homes every fall signals the arrival of colder weather. By early November they begin arriving at wintering spots scattered over southern states like Florida, Alabama, Texas and New Mexico. At lower altitudes the Sandhill Crane is an impress bird checking in at nearly 4 feet tall with a 6 foot wingspan. They roost standing in marshy areas and spend most of their day eating seeds, grain, plants and bugs from marshes and fields. Their noise is an unmistakable rattle that can be heard from miles away. On New Year’s Eve, I awoke at 5:30am and arrived at the refuge by what should have been sunrise at 6:55 am. The skies were a photo-killing overcast gray despite the weather forecast calling for “partly sunny” skies. I visited some outlying waterways while waiting for the refuge to open its gates. While waiting i met a man named Mike who is a Naturalist for Lake Guntersville State Park who gave me tons of information about the refuge and places to go. I was very appreciative of that information with this being my first trip to the refuge. Once the gates had opened and we made our way towards the trails, we immediately spotted 2 Whooping Cranes that were a good distance out into the field. The Whooping Crane is one of the rarest Birds in North America with less than 500 known to be in the wild. We watched for a few minutes to see what the pair would do, but unfortunately they flew the opposite direction ending any hope of photographing the gangly giant. Recent bird counts had showed only about 20 of them scattered around the refuge, so honestly i was happy just to see one. I made a quick stop to check out the wildlife viewing station that the refuge has built before heading back outside to see what i could find. At this point people were starting to flock into the refuge so i made my way down a trail where i found some decent vantage points to photograph the Sandhill Cranes before calling it a morning. Despite the awful weather for the photography portion of the trip, the trip was a good one. Not only did i learn the layout of the refuge for future trips, but i was able to visit with family, attend my nephew’s birthday party and even have a Christmas dinner with my dad, stepmom, sister, brother and my nephews and niece. Not too bad at all.