My 2023 Photography Calendar features 12 images from my journeys throughout 2022. Calendars will ship in early December and make a great Christmas gift. Limited run of 100 units so order soon!

Here’s a little information about each image in this year’s calendar.

COVER   This year’s cover photo was taken in Pope County Illinois. On my way out of the Lusk Creek Wilderness one evening I found this scene, stopped along the road and snapped a photo standing on my tailgate.

JANUARY   The January image was taken at Panther Den Wilderness after one of last winter’s snows. The slower moving falls were still frozen, but under the ice you could see air bubbles moving along the stream.

FEBRUARY   February’s image was taken at Tower Rock Conservation Area in Missouri.  I briefly thought we were going to get a beautiful sunset, but the clearing was in the wrong part of the sky at go time. The hues of pink and blue worked very nicely together though.

MARCH   The March image is of the First Christian Church in East Prairie with snow littering the ground below. Notice the blooms on the tree.

APRIL   The April image was taken at Dutchman Lake in the Shawnee National Forest. This spot has become one of my favorites to explore with hidden gems all around. Plus, it’s not overly crowded which always gets bonus points with me.

MAY   While scanning Garden of the Gods for unique compositions last year i snagged the May photo. This place was crawling with people, but after seeing it in person i understand why!

JUNE   This image came from an anniversary trip to Georgia with my wife. We had just left a Walking Dead tour when in my peripheral vision i noticed this red mill. I’m glad I turned around!

JULY   Each year i try to capture our hometown fireworks show from a different spot in town. I found this composition on Google Maps a few months before. In the end the angle was just a bit far off to get what i was after, but this image turned out nice as well.

AUGUST   This image came from a family trip into the Ozarks to visit Falling Spring Mill.

SEPTEMBER   This image was capture at Mingo National Wildlife Refuge on a spur of the moment trip in late summer.

OCTOBER    Fall in the Shawnee National Forest is usually glorious. This image was from Ferne Clyffe State Park in 2020 which was no exception.

DECEMBER   This photo is of the Dogwood United Methodist Church in Dogwood Missouri.

There are no reviews yet.

Be the first to review “2023 Photography Calendar” Cancel reply 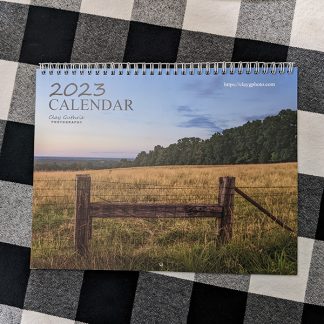